In 2010 Daniel Lieberman and fellow colleagues took to the skeletal biology lab at Harvard university to ask, how and why humans can and did run comfortably without modern running shoes. Before we come to the hypothesised answer we need to first understand how the leg and foot transmit forces when we run.

When we run our initial contact is often our heel and the ground. This contact results in large loads being transmitted through the heel up into the leg (Up to 2.5x the body weight!).  Research into the initial contact loads relationship to injury, has found that it is not the amount of load that is transmitted, but more specifically how fast this load is transmitted. This is often referred to as the “Vertical Loading Rate” (VLR), demonstrated by the sharp peak on contact as shown below. 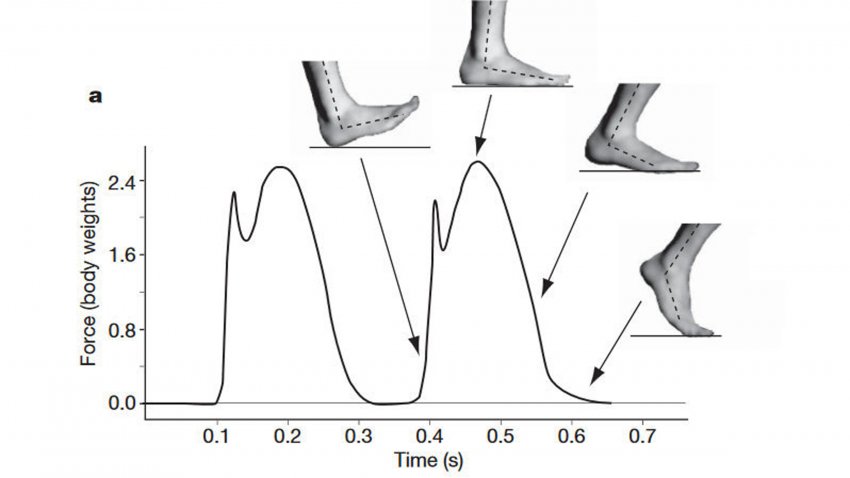 Following initial research into the area it was presumed knowledge that a short VLR was presumably bad and may result in overuse injuries developing through the leg. 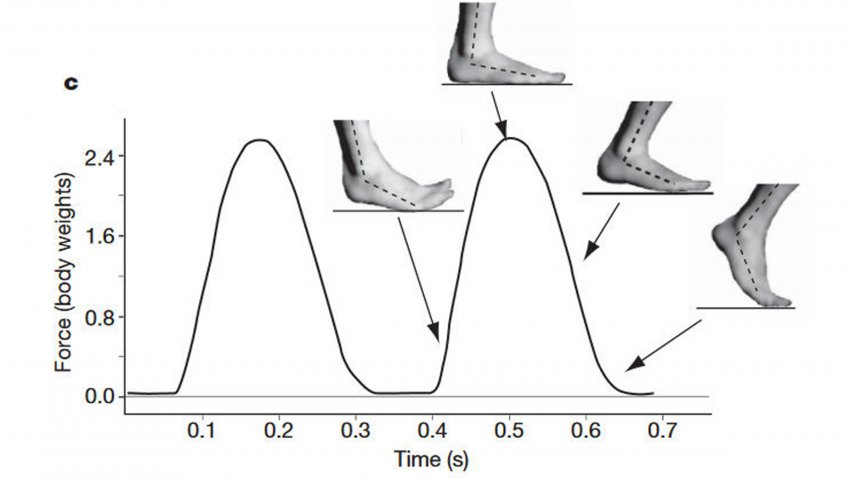 It was here we were introduced to the “Two Mass Model”. Clark, Ryan and Weyland (2014) concluded that the different running ground reaction force–time patterns may have the same mechanical basis. Breaking this down what they found was that the total force applied through a leg was a combination of the initial contact force and the force of the whole body weight pressing into the ground during mid stance. They found that the initial spike is irrelevant of what contacts the ground first but how fast the weight of the body is transmitted into the ground. 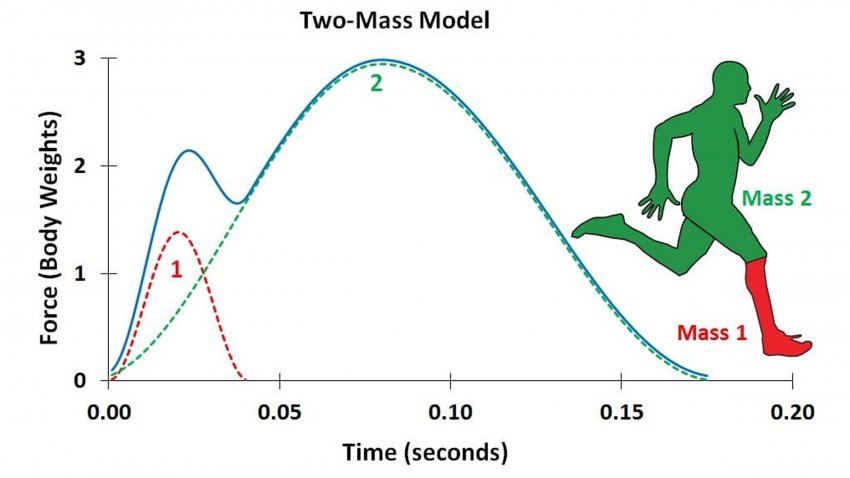 It is the validation of the “Two Mass Model” that allowed Weyland , Udofa, Clarke and Ryan (2019) to attack the conundrum of why an increase in cushioning of a shoe doesn’t impact the overall loading through the leg. They found that The TOTAL loading a leg was exposed to remained the same regardless of what shoes the runner was wearing. The total of Mass 1 and Mass 2 remained the same, as the load of the body remains constant, regardless of shoe variation.  What they did discover however was that the Mass 1 load did change! It seemed that it was higher with cushioned shoes and lower with a more minimal shoe. What’s the reason for this you ask? Running gait changes!

When we run in a heavily cushioned shoe we automatically adjust our gait patterns to utilise the cushion,  resulting in a bigger heel contact without changing the overall loading. When we run in a more minimal shoe we automatically reduce our step length to land off the heel and more on the mid or forefoot. This effectively allows the lower limb to utilise tendon recoil and muscle strength the absorb the load, leading to a lower Mass 1 contact but overall load remains the same. So how does this help us in the shoe buying game?

The force we apply into the group is very important. Take for example Usain Bolt. The force that propels him forward comes back to Newtons Third Law. “For every action, there is an equal and opposite reaction. Therefore in order to run faster you are required to have a large load into the ground. Its this reason why sprinting shoes have no cushioning!

Now these results aren’t fool proof. If you run in a minimal shoe with a large heel contact the possibility of stress response injuries are there. With shoe choice comes habituation. Often we are asked to recommend shoes however every foot, body and gait is different! What we do know now however is that the shoe isn’t the most important part. The interaction of your gait with the shoe is the most important part!

Looking at an injury prevention perspective it is clear to see now that strength in the foot and lower limb in of utmost importance in the forefoot, minimalist running style. In the Heel contact population the cushioning of the shoe is very important. BAREFOOT vs CUSHION? FOR NOW THE DEBATE CONTINUES!

So experiment! Play with shoes, play with gaits and most of all, JUST KEEP MOVING! Who knows in the future there may be a cheap way for us all to measure these forces outside of a lab! Now imagine a shoe shop then!